Note: this blog post is a work in progress and it might be edited for content from time to time.
The paragraph Random climate with unique samples was added on July 10, 2018.

A couple of months ago Fabien Maussion wrote about glacier length changes under a random climate. He showed an experiment where the model was run with a random climate around year t\(^{*}\).

t\(^{*}\) is obtained through mass-balance calibration within the model and represents an glacier equilibrium state. A random climate withing OGGM is generated by randomly choosing the yearly meteorological model input from from a 31-year period centered around a given year (t$^{*}$ in this case). With this method it is possible, but very unlikely, that one specific year (e.g. t\(^{*}\)) is used by the model in several consecutive years.

Fabien’s experiment showed for Hintereisferner that with such a random climate sequence absolute length changes of the order of kilometers are possible. 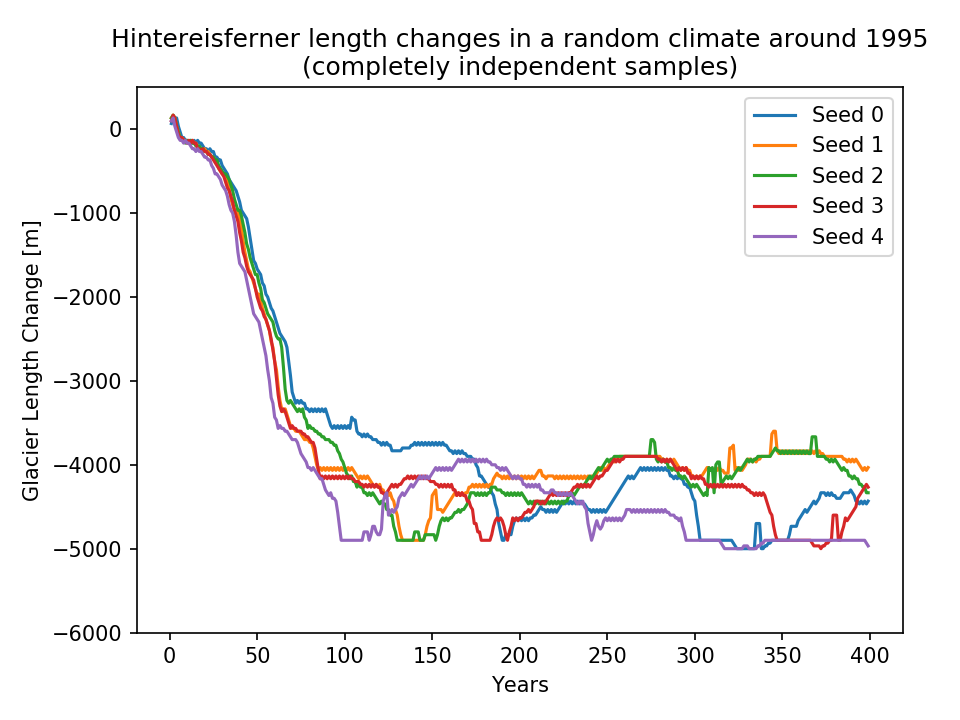 For the first 50-60 years all 5 runs follow a very similar retreating track1. After this strong retreat the scenarios start to deviate and, comparable to the last experiment, individual runs show absolute length changes of the order of kilometers.

We now repeat this experiment for other Alpine glaciers and use the same 5 climate sequences: 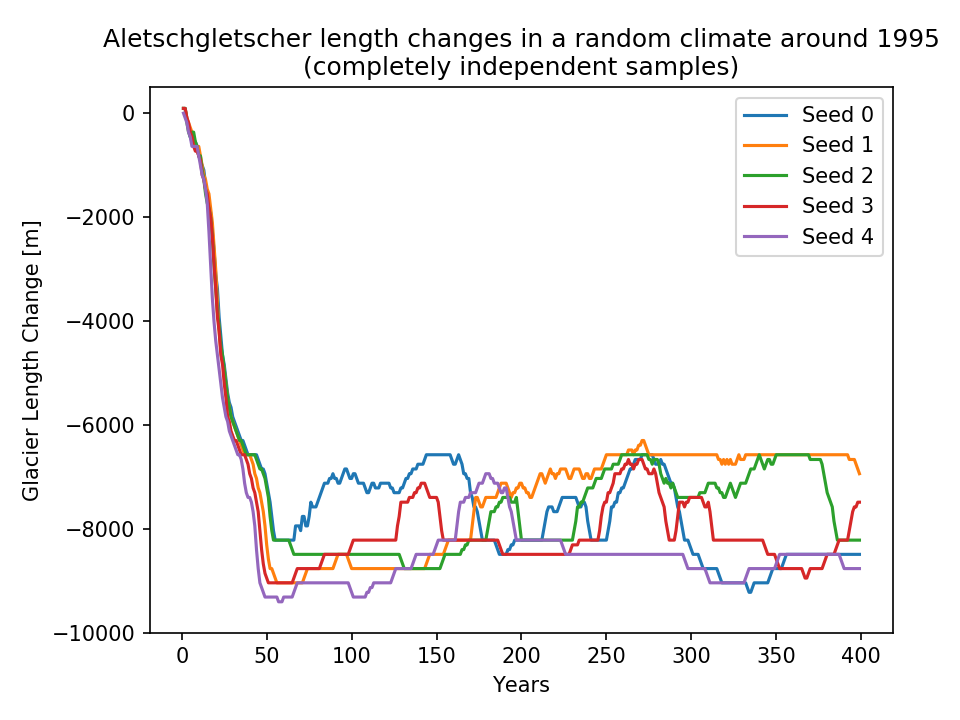 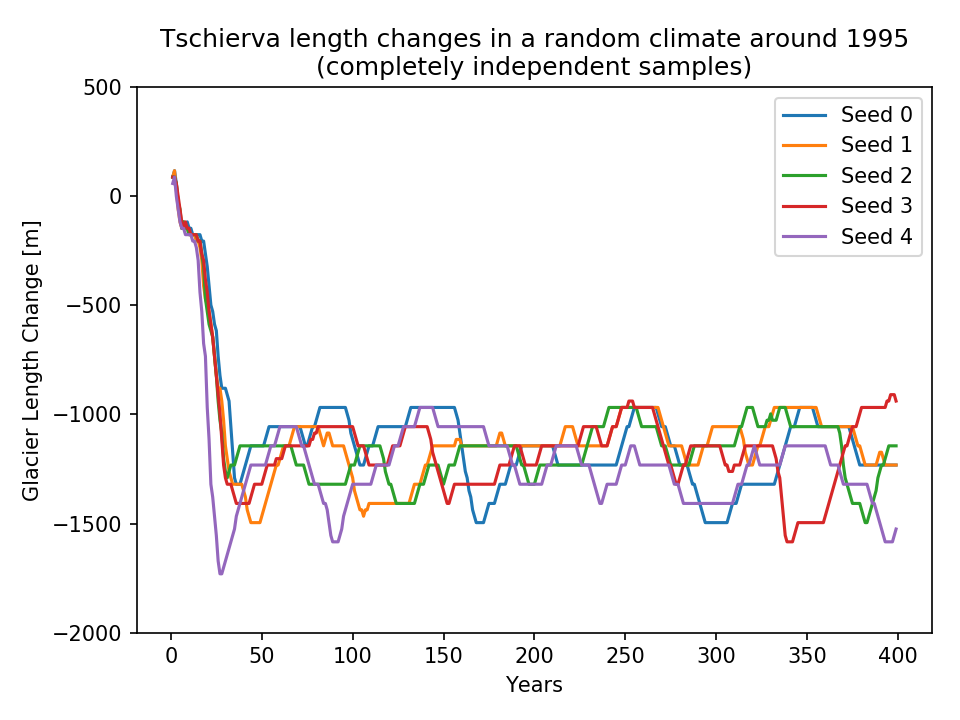 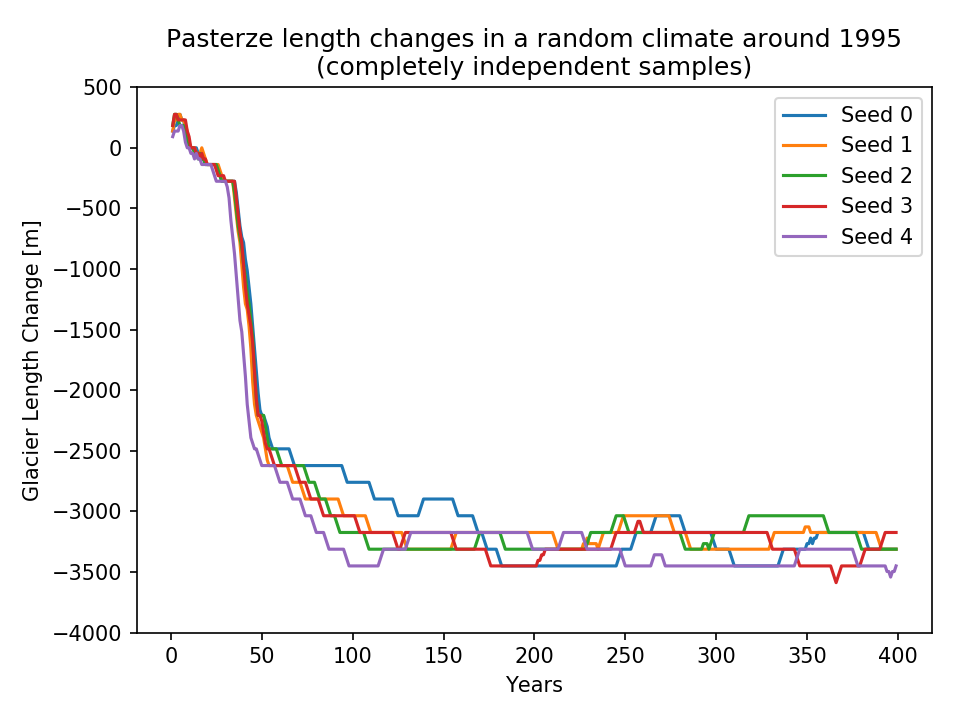 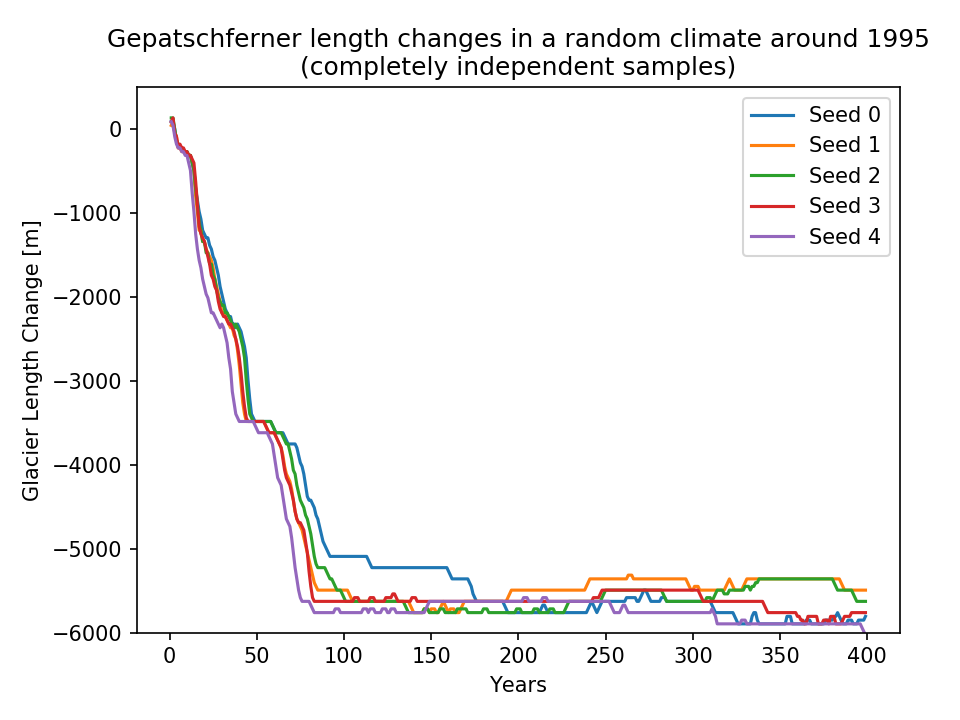 After the initial retreat the glaciers respond in different ways to the random climate: Aletschgletscher and also Tschiervagletscher show absolute length changes which are comparable to the previous shown Hintereisferner. But Pasterze (and also less pronounced Gepatschferner) show less variability within the individual runs. And also the spread between the different runs is smaller compared to the other glaciers.

5 random sequences are not statistically valuable by any means. And nor are the 30 runs shown below. But the experiment still shows some interesting results:

None of the random scenarios was able to reproduce a glacier extend which is comparable to the model initialisation2 within the 400 year simulation. This is especially true for larger glaciers.

All glaciers react differently. This might sound like a trivial remark, but it makes research in this field interesting and challenging. And it shows the advantage of treating glaciers as individual entities within a model, even on global and millennial scales. 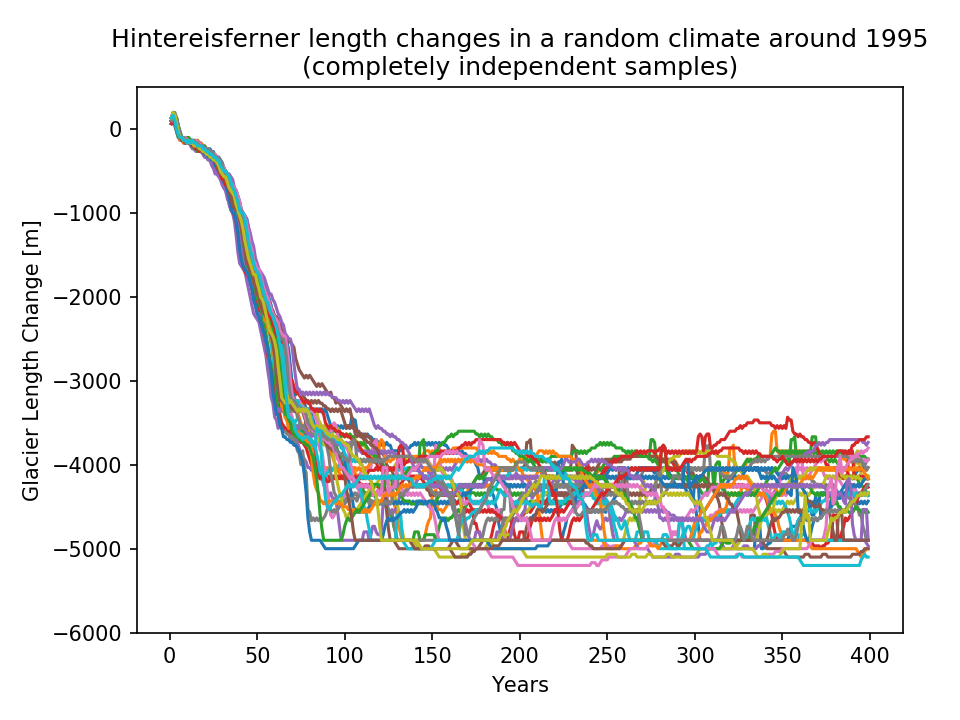 In the first paragraph of this blog post we described how a random climate is currently determined within OGGM. Meanwhile we have implemented a second technique to come up with a random climate for model runs:

All years from a prescribed climate period will be used in random order before one year can be picked again. In our experiment we used the 31-year period 1980-2010 and simulated 400 years. With this new random climate all full 31-year sub-periods of the 400 years will have the same mean and standard deviation. If a 100-year period would be used to simulate 100 years, every year would be exactly once but in a different order than the reference period.

This random climate reduces the variability between individual runs for each glacier. But the initial retreat over the first 100 years of all glaciers is approximately the same as before. After this initial period the absolute length changes are smaller compared to the completely independent random climate which was used before. Glaciers which already showed little changes in the previous experiment after the first 100 years (Pasterze and Gepatschferner) now almost show no length changes at all. 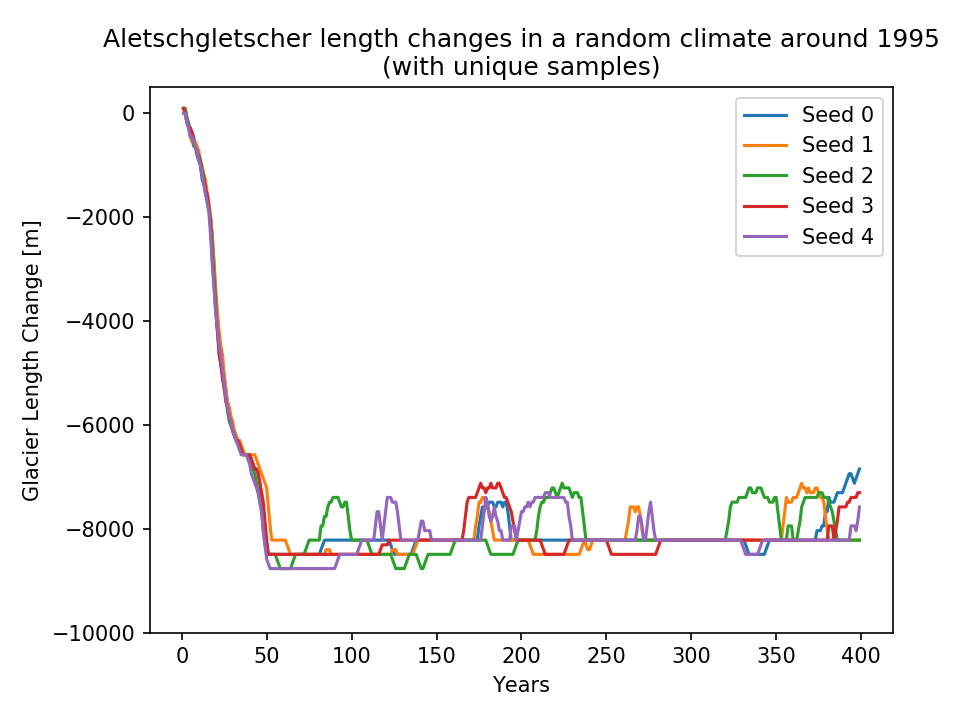 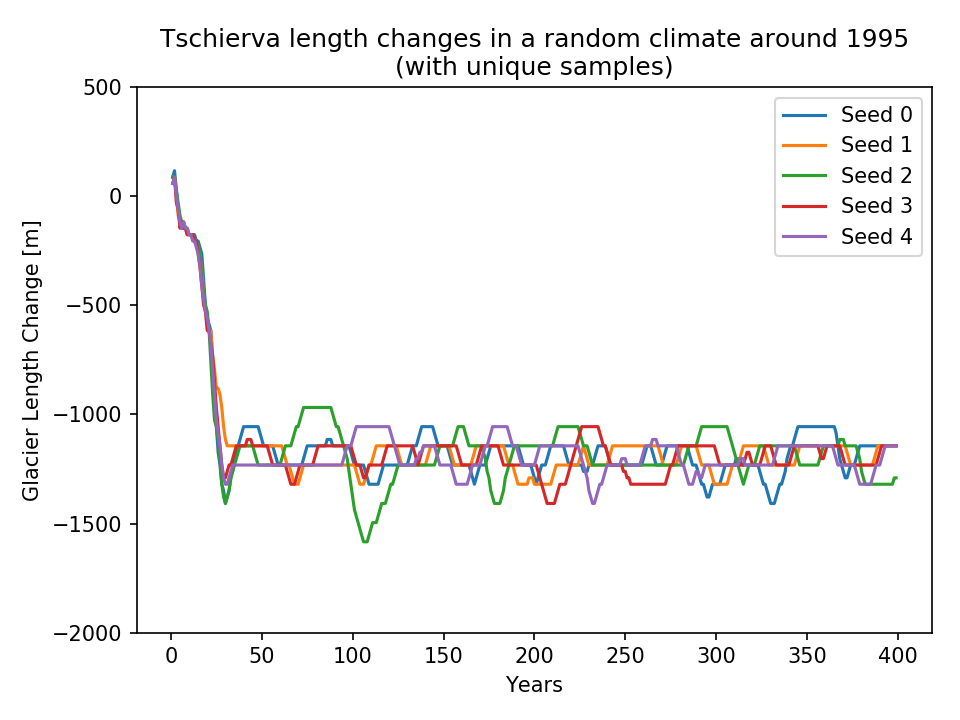 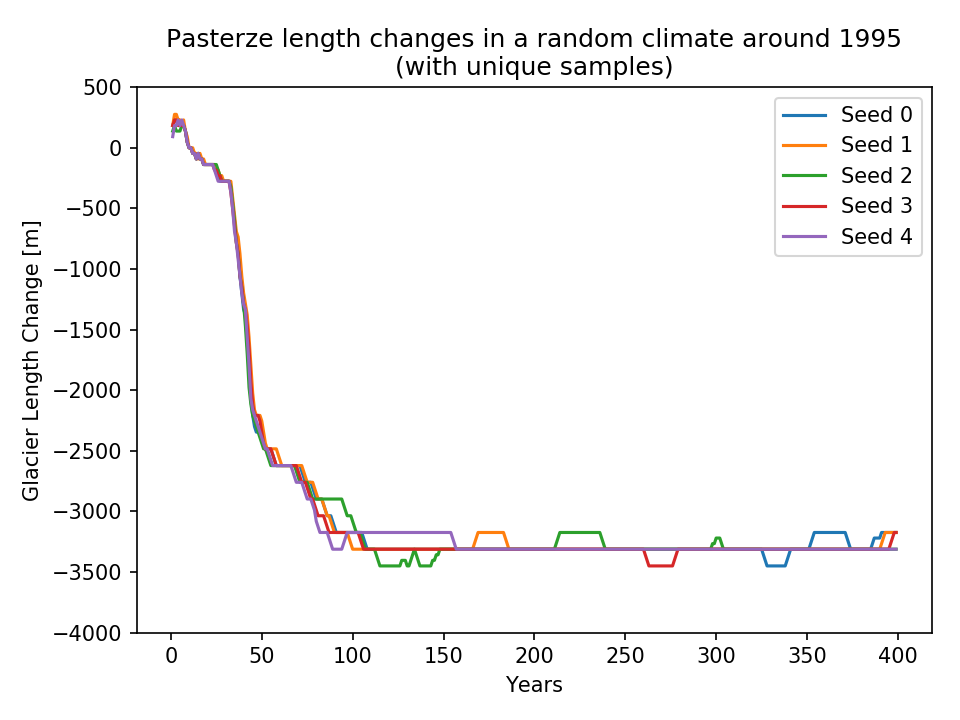 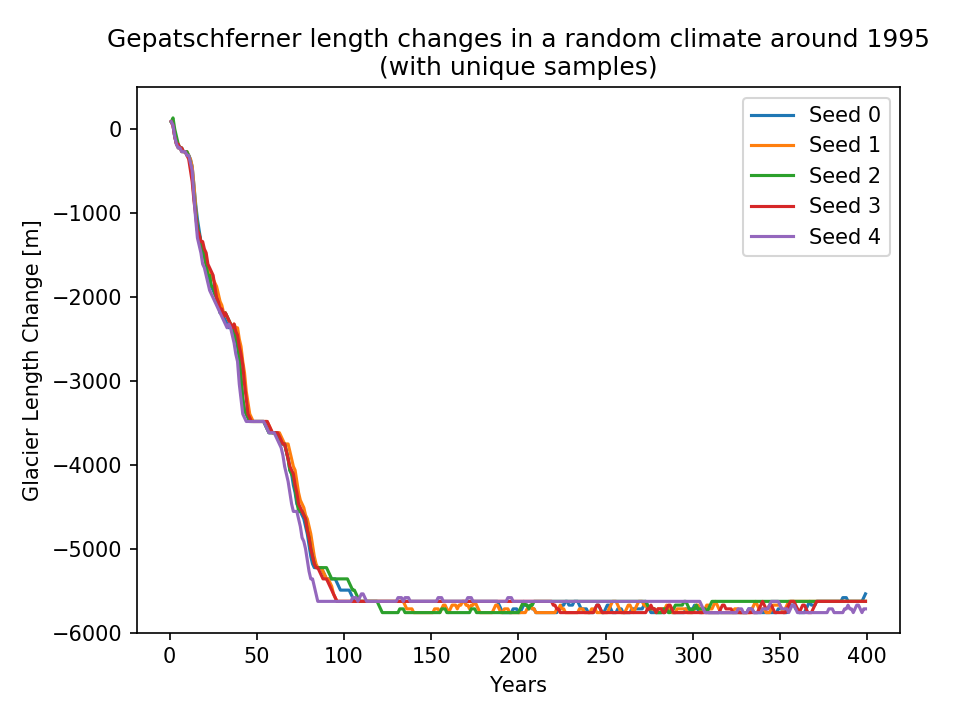 We do explicitly not say that one random climate is superior to or even more true than the other one. This is just to illustrate different methods. Which one to choose will depend on your particular question.