This is the annual AGU week and although I’m nowhere near Washington I will participate to several meetings, one of them about the state and future of the IACS Working group on the Randolph Glacier Inventory.

In the OGGM team, we are heavy users of the RGI, and I am very grateful for these data. Since the first release in 2012, the RGI has been the basis of an incalculable number of studies, some of them highly relevant for society and the IPCC. Our friend and mentor Graham Cogley (1948–2018) was a tenant of this success.

The RGI is now at version 6 (released one and a half years ago) and has significantly gained in maturity since the first release nearly five years earlier. Its coverage is nearly global, the time frame covered gets closer to its target of the 2000-2010 decade, and its attributes (such as glacier or terminus type, hypsometry) are getting more accurate and complete.

So, what now? Is the project “finished”, and can the community move on?

I hope it isn’t, and although I have only been involved in the recent phase of the project, I think I am sufficiently familiar with the product to formulate a non-exhaustive, and only sometimes realistic list of wishes for future versions of the RGI. I am aware of the challenges behind each of these points, this is why they are called “wishes” and not “requests”.

In theory, glacier outlines in the RGI delineate a single “dynamical entity”, mostly defined by a connected ice flow from bottom to top (very similar to a hydrological “catchment basin”, i.e. all ice in a catchment would end up a the glacier tongue it it wasn’t melting on the way). In practice, the majority of the RGI glaciers are divided this way, i.e. in “pieces of cake” as I like to call them. See for example this glacier complex (an “ice cap”) in Iceland: 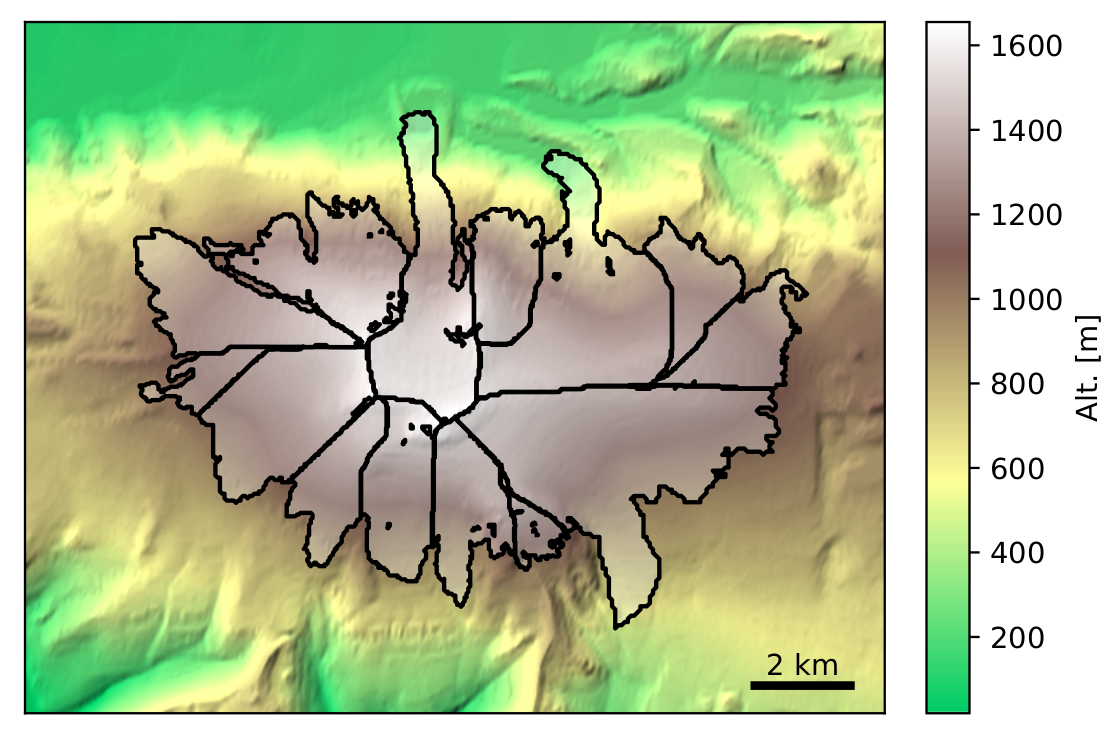 However, there are notable exceptions to this rule. A prominent example is glacier 'RGI60-05.10315' an ice-cap in north-east Greenland and also the largest RGI entity (by far) with 7537 km$^2$: 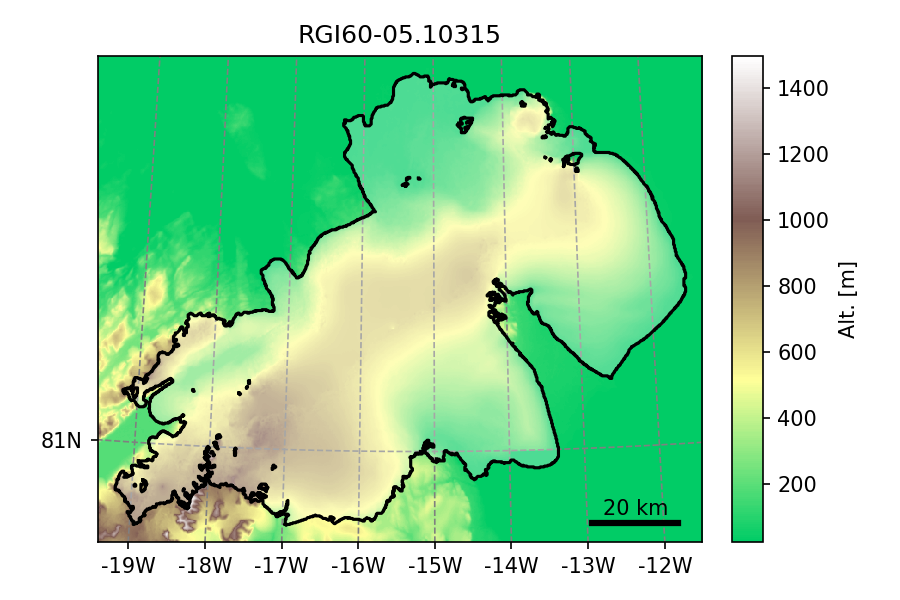 Other examples include the Hintereisferner and Vernagtferner in the Austrian Alps which should actually be divided into several entities but aren’t because they used to be a single glacier some decades ago: 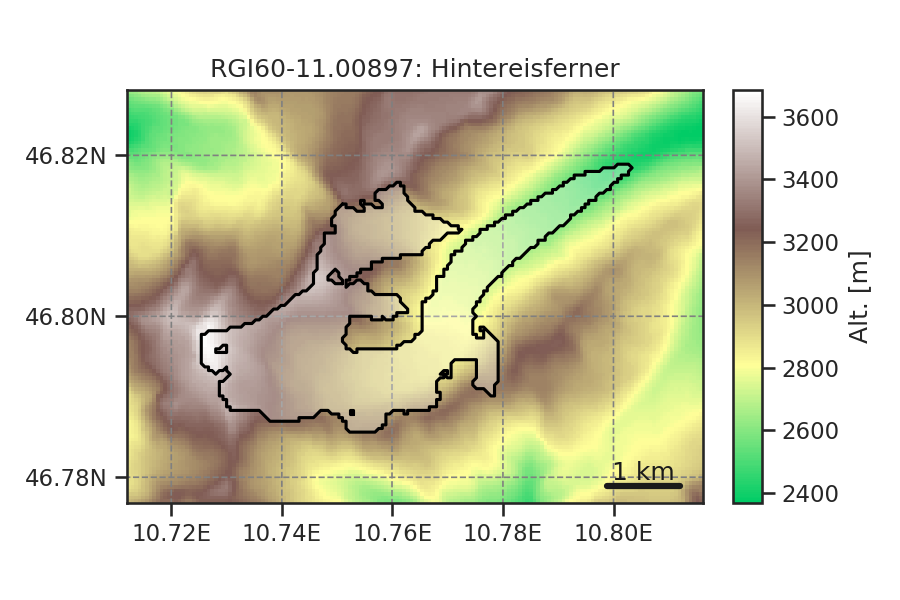 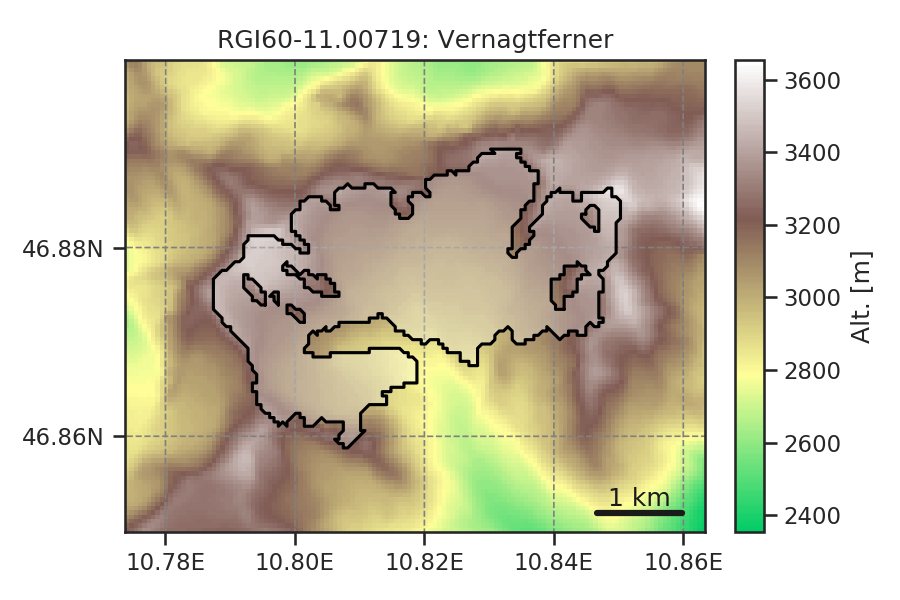 This seems trivial at first, but it is a real problem for (i) volume estimates based on scaling relationships and (ii) flowline modelling ad done by OGGM. Together with topography, it is one of the major source of uncertainty coming from the RGI alone.

Note that some semi automated methods exist (and we have developed our own). Our big efforts so far only had limited success for reasons I won’t extend here (maybe in a later post, however).

Proper glacier divides are on the top on my wishlist since a long time, and I hope that it will get better soon.

Glacier divides are required for some applications, but others would required the merged geometries. Tools like OGGM also need to know where glaciers have boundaries with other glaciers, and to which. Therefore, we developed rgitools to do exactly this.

For example, here is what our tool provides once run on a region of Iceland: 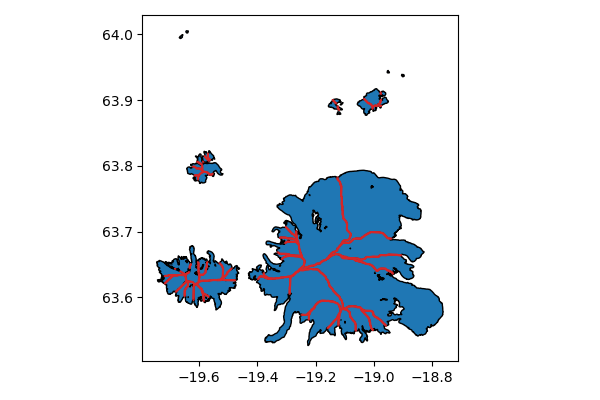 We call these “intersects”, and I believe they would be useful to others as well. Based on these, one can merge the glacier features back to the total ice mass (useful for distributed modelling): 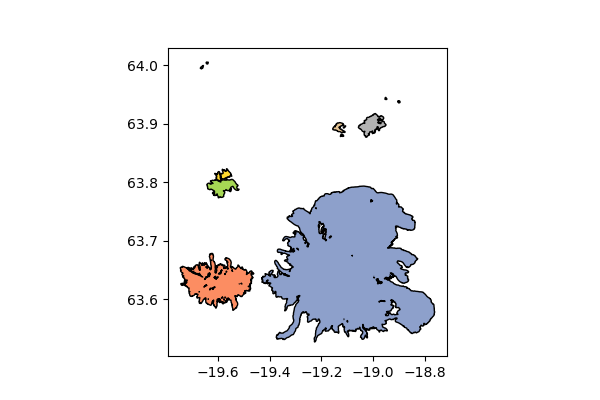 Note that we have been able to compute these, but I think that it would be very valuable (and more consistent) to ship them in parallel to the RGI.

Since Version 4.0, the RGI comes with hypsometric statistics for nearly all glaciers. These were computed by Matthias Huss, who did a tremendous job at gathering and merging various DEM sources. It would be great if the raw data (i.e. individual topographic maps) would also officially ship with the RGI for consolidated boundary conditions across modelling experiments.

Here again, the data is there, but not (yet) available. Note that these data will be available soon as a side product of G2TI, but I think that this should be part of the RGI production process.

Also, I wish there would be a globally available, consistent DEM of the surface of the Earth, but I’ve learned that this is way harder tan I thought it would be.

As a user of the RGI more than a contributor, I was informed about each RGI release when it came out. I believe that a more transparent release process borrowed from software development practices (i.e. “beta releases”) would help to avoid simple but annoying mistakes like listed here.

It would also allow to prepare the attributes listed above in parallel to the release process.

The RGI identifiers (ids) are unique for each version but are not guaranteed to remain the same across versions (for several reasons not explained here).